Usually I end up doing extensive research for most of my acquisitions. Though granted, recently that is mostly caused by COVID, since there’s more time available for such things 😅. But even after having read lots of reviews, I often end up finding additional features or even drawbacks that weren’t mentioned anywhere once I start to use it a bit.

Which I attribute to all the reviewers making a living off it not having enough time to cover products in-depth, as they have to eventually move on to the next one. Additionally there will always be a conflict of interest. If not directly by getting paid by the company making the product, then at least indirectly in the fact that a product that has gotten favorable reviews will bring in more affiliate link revenue.

I am in the fortunate position that I don’t care about the numbers here at all and can publish whatever I want, as I don’t make any money off it. In fact I never had any Affiliate Links here, have never received anything for free, have paid for everything myself and genuinely am using my stuff for real in my day-to-day life. With that out of the way, let’s get to it!

Lumintop states that the Chassis is made from (Aircraft-grade) Aluminum alloy which makes this entire Flashlight non-magnetic, except for the small body clip. Speaking of the clip, it can be attached two directions (with the light facing forwards or backwards) and seems sturdy enough for EDC purposes.

The knurled surfaces provide sufficient grip, even when wet (yes, I checked with both water and grease!). The only blemishes I could make out so far were some tiny groves left over from the machining at the tail-end.

Side note: In the German translation they translated the tail-end switch with «Schwanzeschalter», which made me chuckle because it’s a hilariously bad translation.

As for the light beam itself, I can’t make any qualitative statements, as I don’t have any measuring equipment. Subjectively the beam is a bit more blue-ish than anticipated but still okay. On the other hand it is a flashlight, it illuminates wherever you point it and has a pretty wide throw for that matter. 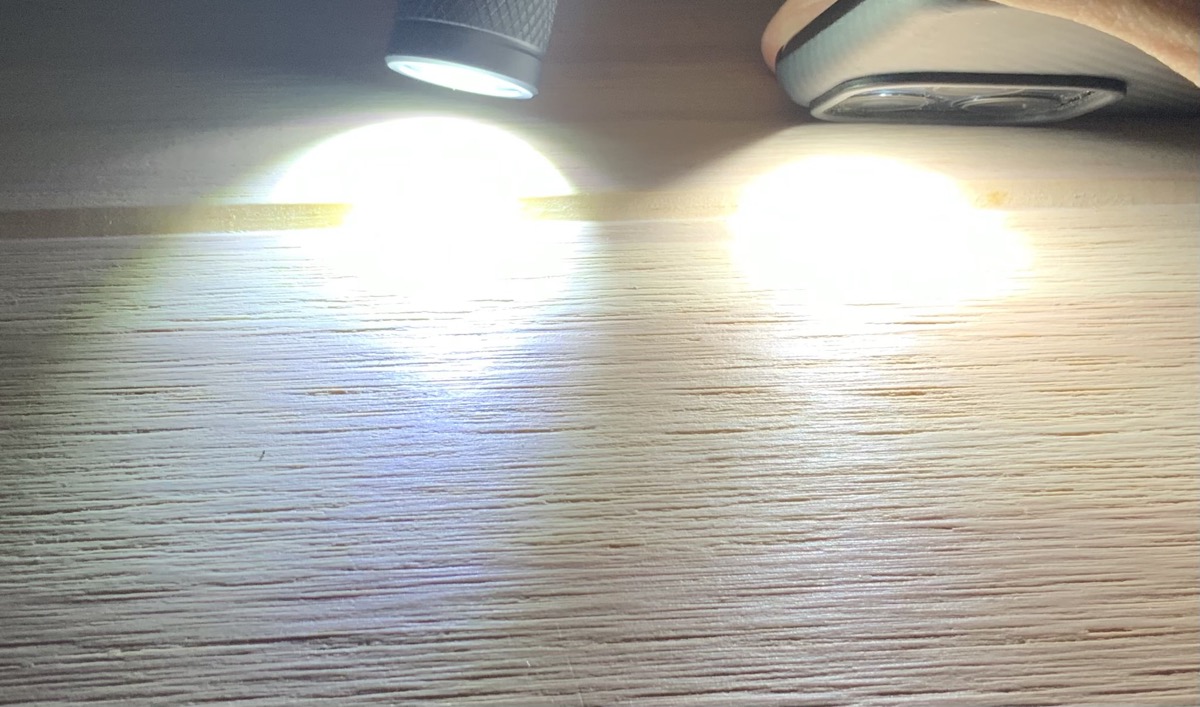 To approximately demonstrate the relative light color, here it is shown next to the iPhone 11 Pro Camera flash. But in general: Don’t buy something that is advertised as EDC light and expect color accuracy for photography!

To operate the light you can either use the clicky button at the back or if that is in its on position, slightly unscrew either of the tube threadings (less than approx a 10th rotation needed).

Both of the operating modes work fine, though the button one I definitely prefer. Big plus also that the button is protected by two flaps to prevent accidental activations.

A big drawback however is that I can actuate the switch by merely placing a finger on top and wiggling it a bit. I would have expected a clicky button to only actuate when pressed beyond the click position!

The light can be either ordered standalone or bundled with a 3.7V lumintop-branded high-capacity battery. I opted for the latter to compare it to my regular 1.2V eneloops.

No surprise there: the high-power ones are much brighter. It is always good to have the option to fall back to AA batteries, which are ubiquitous.

I did not do any tests how long it takes from a fully charged battery to the light going off, since it wouldn’t be representative anyways. I A: don’t know how fresh the included high-capacity battery is and B: my eneloops are quite old (as I already mentioned, I use them everywhere) so I don’t know their status either and it wouldn’t compare to your experience anyways.

Weirdly they decided to add a light-indicator into the button, that seems to show the inserted battery type when the device is turned off? I can’t find anything about this in their manual. From my testing, it will glow blue whenever the high-capacity battery is in. 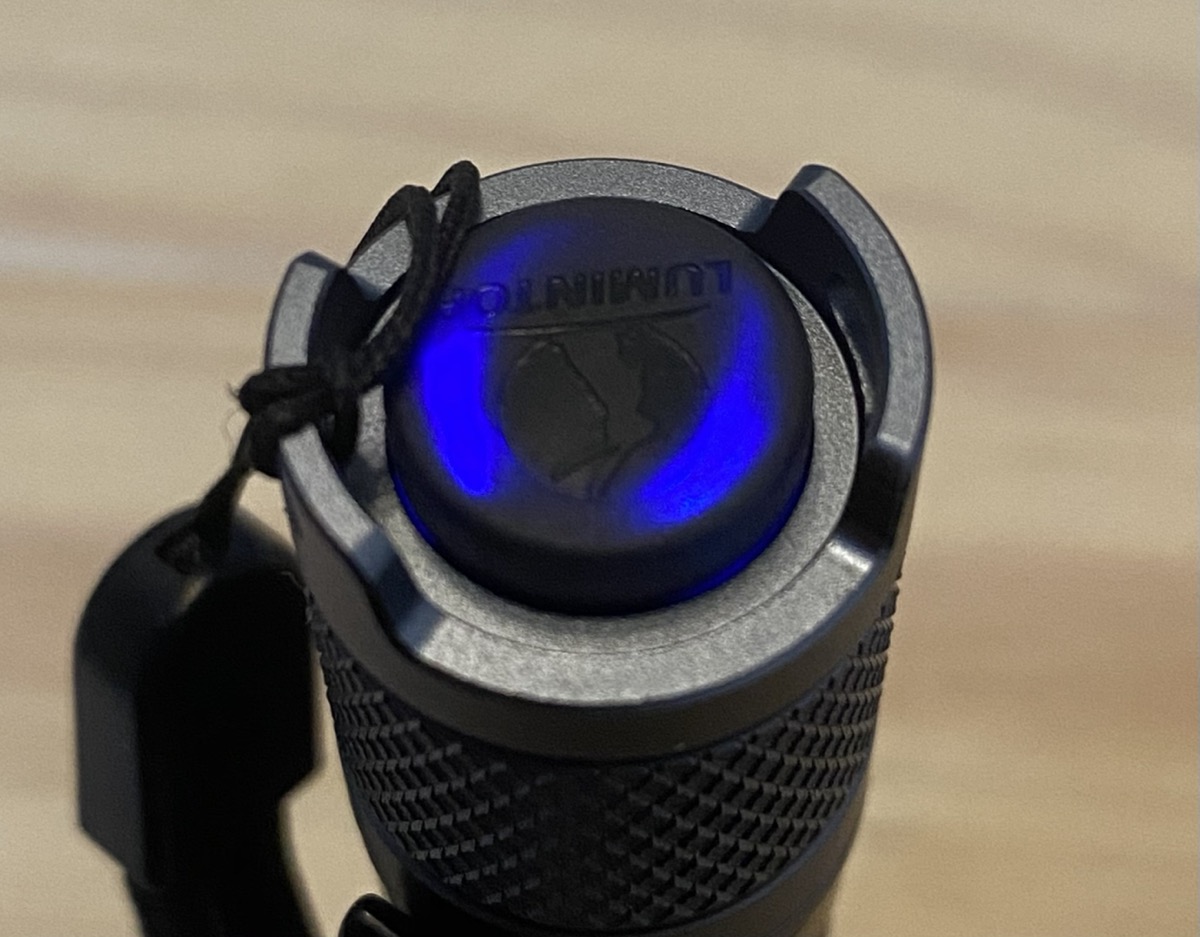 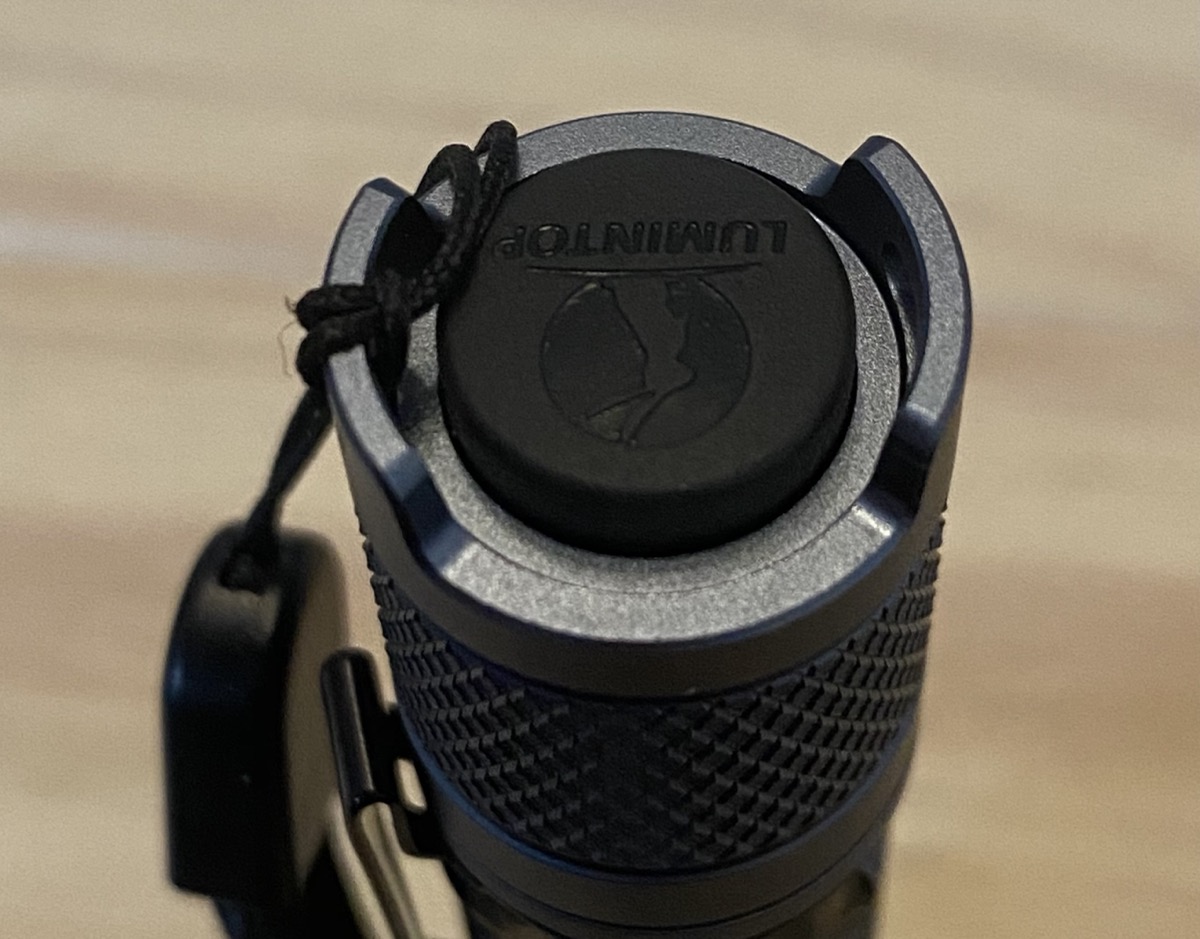 Here’s two pictures showing the indicator light being on and another one where its off with Eneloop batteries inserted.

Unsurprisingly it can be turned off by unwinding the threading a bit, which I’ll have to do from now on, so I can keep this in my backpack without worries. But still weird, especially since this will slowly drain the battery over time causing it not to be ready when you actually need it.

It comes with two replacement o-rings for a good seal and a small loop that can be attached to the tail-flaps. Needless to say: If you attach the loop it doesn’t stand upright anymore, which they could have easily solved by positioning the loop-hole differently or filing in a small notch (Come to think of it, that’s probably what I’ll end up doing).

Also it does come with a fluorescing diffusion cap, which took me quite by surprise how little light it needs to activate and how bright it can glow. 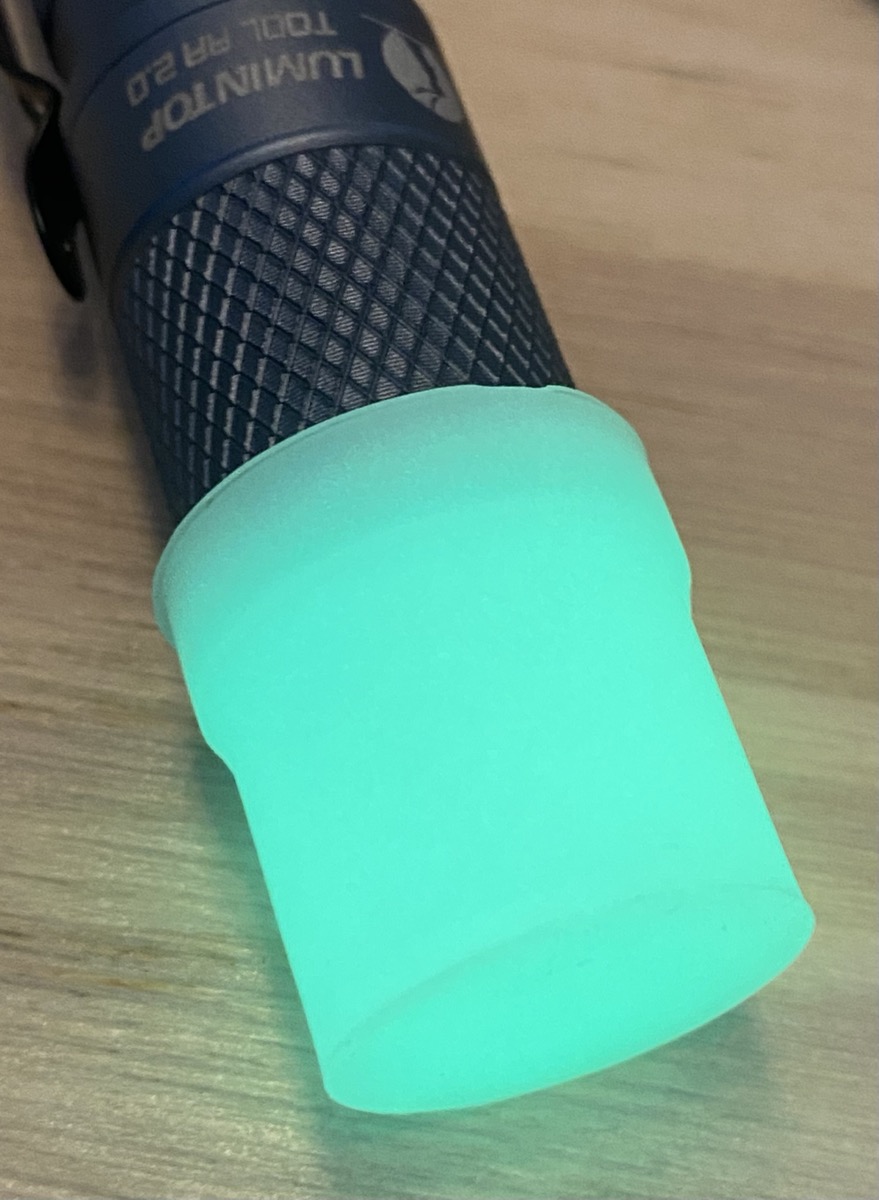 To summarize: This light is versatile and flexible, especially considering the price, which is around 20€ and makes for a cheap EDC light. If you can live with its flaws that is. And it really does have some severe flaws, like the clicky button that registers non-clicky touches and the weird indicator light.

When you’re a heavy-duty user, this light is not for you, but I bet you already knew that. For everybody else, I’d say give it a try. You can’t go wrong with that price.

Like with all the affiliate link review blogs, I can’t make any statements about durability (yet) but I might post a follow-up when there’s something to tell.

Yet another side-note: BTW, Lumintop offers a 30-day replacement, 5 year repair, and lifetime paid repair service. Which is kind of ridiculous, given that shipping to and from China is going to be more expensive than a completely new light.

So that concludes this. I hope this gives a good overwiew of its strengths and weaknesses outside of some manufacturer-provided spec sheet and marketing material and you actually get to know all of this before you buy.

Another tell-tale sign that this is not a paid review is that I probably have written the name LUmintop in various different ways throughout the text and I just don’t give a shit.